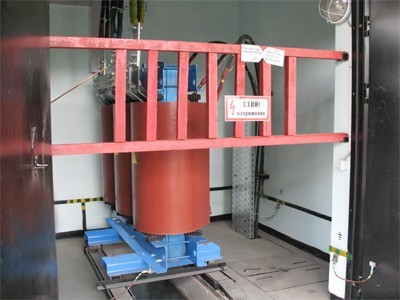 The tests were performed in line with the VNIIAM (Russian Research and Development Institute for Nuclear Power Machinery) methodology. The transformers were subjected to various types of mechanical impact: vibrations, shocks, hits. As a result, the researchers concluded as follows: the TSL series power transformers manufactured by “Transformer” plant meet the earthquake resistance requirements under conditions of seismic activity of 9 points (on the MSK-64 scale).

The test results indicate that dry-type TSL transformers manufactured by “Transformer” can be used in areas with increased seismic activity. In Russia, these are North Caucasus, Southern Siberia and the Far East. At the same time, the earthquake-resistant transformers will be a good option even for fairly seismically neutral areas for several reasons. First, scientists suggest that weak seismic activity (up to 5-6 points) can occur almost everywhere across the Eastern European Plain and in the Urals. And secondly, shocks and shakes of transformers occur not only during earthquakes, but also during transportation or installation.

Thus, fire-resistant, earthquake-resistant, environmentally friendly, frost-resistant (freeze-thaw-stable version) dry-type TSL power transformers are the only possible solution for a number of regions. In addition, the compact and low noise design makes these transformers simply irreplaceable in many cases.

Components of substations (reinforced concrete blocks equipped with high-voltage and low-voltage equipment) manufactured by “Transformer” have also undergone earthquake resistance testing. The tests have shown that the structural elements remain free from damage even after impacts corresponding to 9-point earthquakes.

Concrete structures have undergone explosion resistance testing. The tests have shown that “Transformer” modules can withstand short arc and internal explosion. At the same time, the base and roof do not deform, and the blinds and metal doors do not break away from the structure.

TSL substations and transformers manufactured by “Transformer” are recommended for operation in seismically active regions.

We have been working for over 20 years
Quality assurance
Guarantee

Compliance with ISO and GOST